Noida: Mobile snatching is a very common occurrence in metro cities around India. Be it in public transport or just walking in a secluded area, one has to very careful with their precious belongings, the mobile phone being the most important one.

However, one cannot underestimate thieves as well. If they resort to stealing, they will try to nab the latest and most expensive gadget or jewelry. Older the item, the lesser probability it has to be get snatched.

A hilarious yet awkward instance of this occurred in Noida recently. A senior legal correspondent named Debayan Roy was exiting the Sector 52 Metro station in Noida when a man wearing a black mask came and snatched his Samsung Galaxy S10+ from his hands and scurried away.

Before Roy could even react, he came back and returned the phone. Yes, he actually did that!

Now, why would any thief return something that they stole from a man? The reason was that he thought that it was the latest OnePlus 9 Pro. Hence, it was returned to him safely.

Roy posted the ordeal on his Twitter page. He was a 'little numb' while writing it. 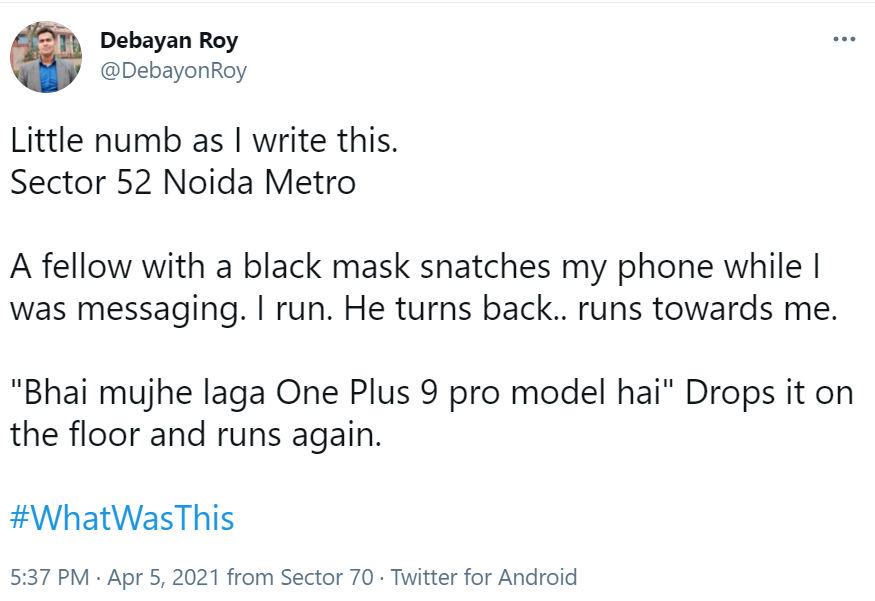 "Bhai mujhe laga One Plus 9 pro model hai," the thief told him when he returned it to him. Or rather, dropped it on the floor.

The tweet went viral instantly. It caught the attention of news organizations all around the country as well as that of netizens.

They took to the comments section and were thoroughly amused by this. "Woh chor One Plus fanboy hoga," a user hilariously quipped.

Another one joked, "In UP the thieves and muggers have class. Everyone wants to be rich drinking small Fanta." A user also called it 'prank video stuff.'